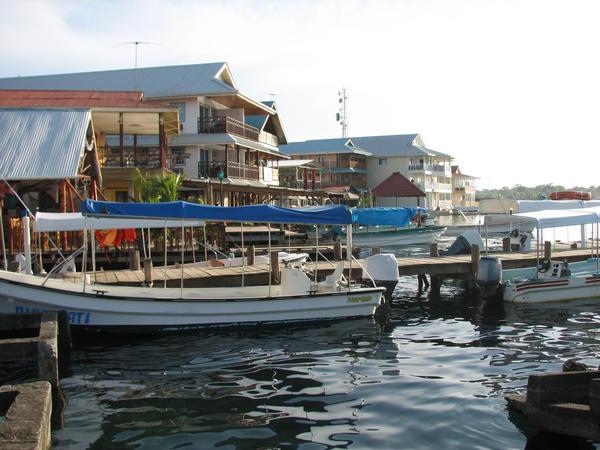 When Christopher Columbus arrived at Bocas del Toro in 1502, Guaymi, Teribe and Bokota indians were the indian inhabitants.

During the Spanish colonial period (16th to 19th centuries) the Spanish really ignored the area. The English were the ones who established settlements like in Boca del Drago, where in 1745 they were raising cattle and chickens.In the beginning of the 19th century, English ships from Jamaica traded with Bocas del Toro for marine turtle shell, live marine turtles, cocoa, mahogany wood and sarsaparilla.

In 1826 Bocas del Toro town was founded by immigrants from Jamaica, San Andreas and Providencia immigrants. At this time the town was little more than a camp for traders in turtle shells.

In 1837 the Bocas del Toro canton was designated, and for the next 50 years Bocas was part of the provinces of Chiriqui, Panama and Colon.

In 1880 the banana started to assume importance commercially with the Snyder Banana Company o in 1890 and United Fruit Company in 1899.

During the liberal revolution in 1895 the first battle happened in the islands.

As well as bananas the area produced sugar cane, cocoa and coconut. While still continuing to export turtle shell and live turtles. The Surgeon Brothers company operated ships taking cargo and passengers to Colon and other Caribbean ports. .

In 1902, during the "Thousand Days War", Bocas del Toro was the scene of further violence, when the revolutionaries conquered the city after a bloody battle.

After the separation of Panama from Columbia, Bocas del Toro Province was created in 1903, and until 1930 the local Bocas del Toro economy flourished with agriculture, fishing, and commercial growth, and the province was the third most import economically in Panama. At that time consulates for England, Germany, Costa Rica, United States and France were based in Bocas. Three newspapers were published: The Telegraph, The Citizen and The Central American Express.

1904, a big fire burned 160 houses in Bocas, including all public offices, schools, the municipal house and many commercial offices. Again in 1907, 1918 and 1929, fires destroyed large sectors of the city. Being built almost totally in wood, fire was particularly destructive in Bocas.

During the exploitation of the bananas, the United Fruit Company owned most of the islands and established their offices in the building that today is the Bahia Hotel. The dock in front of the Bahia Hotel used to be the main United Fruit Company dock and many of the old houses were the homes of its workers and employees. The restored house next to the dock is today the home of a local senator. But around 1914 a banana pest started to attack the banana plants and by 1934 all bananas had perished, and the town started a long slide into decline.

1921 when the Costa Rican troops invaded Bocas during a border war, but were defeated

Today a road connects Chiriqui Grande with Almirante, so that Bocas can be reached from the rest of Panama. Tourism is now seen as the economic way forward for the area

The architecture of the old houses, with their old caribbean style, is part of the charm of Bocas. Notice the fine woodwork, the balconies and architectural details.

The fine old Spanish building with interior patios, facing Bolivar Park, houses the regional Government, and is now being restored. A particular feature is the clock that strikes every 15 minutes.